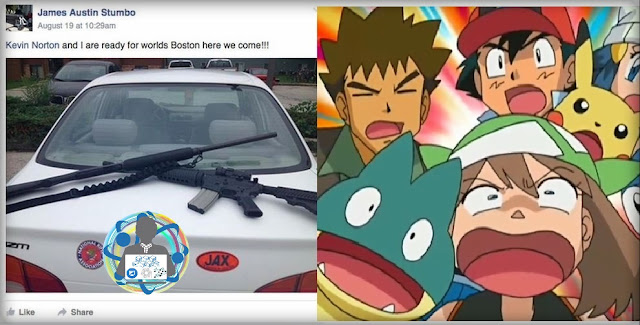 The comment was more disturbing than humorous. The pair was arrested in Boston after they were barred from entering into the event at the Hynes Convention Center on Thursday. On searching their vehicle, police found “one 12-gauge Remington shotgun, one DPMS Model AR-15 rifle, several hundred rounds of ammunition, and a hunting knife”.
There have been concerns in the US regarding flouting of the arms’ rules by the citizens. Recently, in the news was a drone with a handgun mounted on it.
The Boston Police Department said that they could not produce a License to Carry weapons and were arrested on Unlawful Possession of a Firearm, Unlawful Possession of Ammunition, and other firearm-related charges.

The Masters division of the Pokemon World championship offered more than $500,000 in scholarships as prizes, to which both Stumbo and Norton were invited competitors. The attendees of the event were informed of the incident on Saturday. However, the World Championship event continued amidst heavy security.
The arrest was made possible after the event security team informed the Boston Police about the post and a possible shoot-down, in case any of those guys went berserk.
The comment made by Norton could have been overlooked as a humorous comment, but actually reaching the convention with artillery in your car defies common sense and is unjustifiable.
What do you think about this issue? Share your views in comments below?