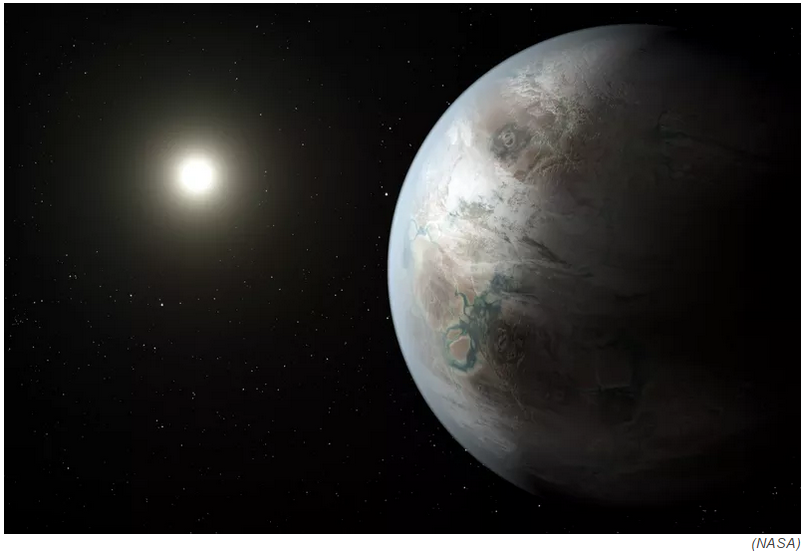 NASA’s exoplanet-hunting Kepler spacecraft has spotted another Earth-like world. The space agency today announced the discovery of Kepler-452b, the smallest planet we’ve found yet orbiting inside a star’s habitable zone — the places around a sun where it’s warm enough for liquid surface water. NASA researchers are dubbing Kepler-452b as Earth 2.0.
Kepler-452b is about 60 percent larger than Earth and orbits its parent star, Kepler-452, once every 385 days — just 20 days longer than Earth orbits the Sun. Kepler-452 is also a lot like our own host star; it’s roughly the same size and temperature and only 20 percent brighter. Kepler-452 is also 6 billion years old, approximately 1.5 billion years older than our Sun.
“THIS IS REALLY THE FIRST STEP, AND HUMANKIND’S FIRST STEP, TO ANSWERING THAT QUESTION “ARE WE ALONE IN THE UNIVERSE?”
Kepler-452b’s system is about 1,400 light years away from our Solar System, located in the constellation Cygnus. NASA researchers don’t know its exact mass or what it’s made out of, but they said that previous research has shown that planets the size of Kepler-452b are usually rocky. And since the exoplanet has spent 6 billion years in orbit around its star, the chances are good that life may be dwelling there.
“This is really the first step, and humankind’s first step, to answering that question “Are we alone in the Universe?” John Jenkins, of the SETI Institute, said at a NASA press conference. “You and I won’t be traveling to these planets, but our children’s children’s children may.”
The discovery of Kepler-452b is substantial but it’s not the first of its kind. Last year, astronomers at the SETI Institute and NASA Ames Researcher Center announced the first Earth-sized exoplanet, Kepler-186f, found orbiting in a star’s habitable zone. The main difference between Kepler-186f and Kepler-452b is their host stars; Kepler-186 is a red dwarf whereas Kepler-452 is much more closely related to our Sun.
The Kepler spacecraft was launched in 2009, with the goal of searching for other Earth-like worlds within the Milky Way Galaxy. So far, the spacecraft has found 4,696 exoplanet candidates, and follow-up observations and analysis have confirmed 1,030 of these candidates to exist. Through the combined efforts of Kepler and other astronomers we know of 1,927 exoplanets out there in the cosmos.
Verge Video: The biggest discoveries from the Pluto flyby

Everything You Need to Know About Windows 10 Upgrade – FAQs