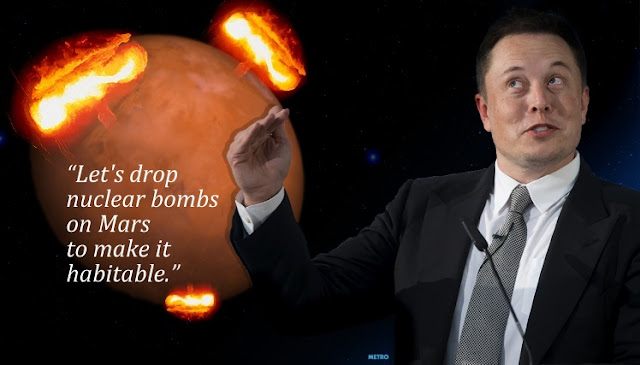 SP’s: Elon Musk’s plan to nuke Mars to make it habitable could have substance. After his crazy idea made headlines look what he has in for its explanation.
Elon Musk is an intelligent man, but his idea of nuking Mars to make it habitable made him look more like a crazy scientist than a technology pioneer who founded organizations like Tesla Motors, SpaceX, and PayPal.
Musk gave his plan to speed up the warming process of the red planet to make it liveable on the Late Show with Stephen Colbert which could not be digested by most of the viewers including Colbert himself who compared him to the supervillain Lex Luthor.
Now, Musk tries to clear the air as he explains what he meant by nuking Mars. He said that he didn’t want to blow up the Martian surface but create tiny pulse suns over the planet’s North and South pole. As we all know our Sun itself is a product of nuclear fusion which helps Earth to stay warm, while the greenhouse gases add to the process.
As per Musk’s plan, “Launch a series of fusion bombs above the planet, not on the planet and create two tiny suns over its poles after every several seconds. Let the process continue for some time which will gasify frozen carbon dioxide, thicken the atmosphere and warm up the water and all of that would have a greenhouse effect.”
The crux of Musk’s intent is to fasten up the warming of our neighbour and make it liveable as soon as possible. After all, he realizes our Earth is pushing its limits to sustain life while others are making merry.
Via: Mashable