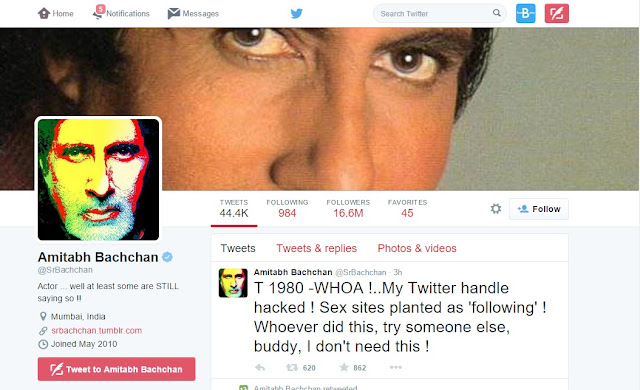 The Twitter account of Amitabh Bachchan, Bollywood’s biggest superstar, has been hacked and some adult sites have been added as ‘following’.

Atweet from Mr. Bachchan’s official Twitter handler @SrBachhan says: “WHOA !..My Twitter handle hacked ! Sex sites planted as ‘following’ ! Whoever did this, try someone else, buddy, I don’t need this !”

According to Mr. Bachchan, hackers added some sex sites in his “following” list. This means that some person other than him accessed Bollywood superstar’s account and added these adult websites.
It should be noted that Mr. Bachhan has the highest number of Twitter followers in India, followed by actor Shah Rukh Khan, Indian PM Narendra Modi and superstar Salman Khan.

However, it isn’t always necessary for an account to be hacked into if it has some random followers. It could also happen due to the apps that have access to the Twitter accounts.
We scanned his current list of 984 followers and currently Mr. Bachchan has unfollowed those adult sites. fossBytes advises you to stay safe on the web and use social media with great care.
Share your opinions in the comments below.